A "cradle Episcopalian" who was raised on a chicken farm in upstate New York, I encountered our Lord very powerfully and personally during what I can only term a spiritual awakening as I completed Cursillo in 1993. I was ordained as a Deacon in June of 2003 and in 2005 elected as Archdeacon. Previously serving as Deacon Vicar of St. Christopher’s Cobleskill, I joined the St. Stephen’s family in February of 2009. I also serve the Diocese of Albany both as Director of our Deacon Formation Program and Secretary of the Diocese.

I graduated from Ithaca College and Colgate University with degrees in Music Education and Student Personnel Management. My doctorate is in Counseling Psychology from The University at Albany. In addition to serving our Lord and His church, I love music, camping and being outdoors, and being in, on, or near the water, and of course, being a doting grandfather. With Love in Christ,
Archdeacon Harvey 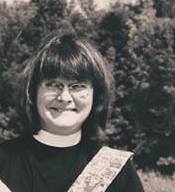 Born in Albany, NY, the Reverend Justine M. Guernsey grew up in Colonie.  She is a graduate of Albany Business College and Sage College of Albany majoring in Business Administration.

After discerning God’s call to the vocational diaconate, Deacon Justine was ordained on March 25, 2000 and was assigned to the Cathedral of All Saints for ten years.  She was also assigned to St. Matthew’s in Latham before coming to St. Stephen’s in 2014.   Deacon Justine is currently the Assistant Director of the Deacon Formation Program.  She is certified in “Godly Play” and loves sharing the Good News with the children of the parish.

Deacon Justine and husband Bill have three sons, James, Timothy and Justin.  In her spare time, she enjoys reading, crocheting and spending time with her family and friends especially her four grandchildren: Isabella, Sophia, Landon and Emma.     ﻿

Deacon Bob has been faithfully serving the St. Stephen's community since 2003, when he was ordained a Deacon in Christ's Holy Catholic Church.